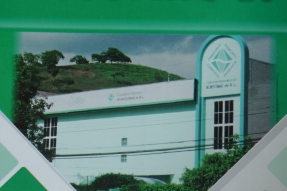 A local cooperative assists with loans to small enterprises. Cheese and dairy products which are produced locally can be purchased at good prices in a couple of stores. In downtown Agua Caliente there is a Catholic church, recently under restoration, and a mini park. The church is a beautiful colonial church and it appears more majestic than those in neighboring municipalities. Legend has it that the massive bell in one of the towers is just a replica of the original one which was stolen overnight and then taken by thieves to a famous church in Ahuachapan sometime in the 20th century. Every Thursday morning from about eight to eleven there is a market place in the streets. This is when the majority of people from neighboring hamlets or “cantones” buy their food and clothing items and may come down to sell cattle or farm products. Visitors can enjoy a pupusa at a local pupuseria. There is a vibrant environment in the area. Hundreds of people emigrated to as far as Australia and Europe in the 80’s as the town was the scene of conflicts between the leftist guerrillas and the government troops. As these emigrants started to buy land in Agua Caliente, land prices soared. It is not unusual to find houses priced at $50,000.00, something which was unheard of twenty five years ago.

In 1967, Tim Lavelle, an American Peace Corps volunteer played a vital role in the development of Agua Caliente. Paul Freundlich produced a film at the time to recount some of the activities that Tim undertook and the vital role he played in the recent history of the town. He was a key player in the foundation of a credit union which nowadays is part of the economic life of the town. Subsequently, the film was uploaded in YouTube in 2009 (https://www.youtube.com/watch?v=tJHZJ33Kr8E). Years later, in 2013, the full circle was closed when Tim Lavelle and Paul Freundlich return to Agua Caliente. At the occasion, Tim received a recognition from personnel of the very cooperative he helped found. The event was recorded by Paul Freundlich in his new film “Return to Agua Caliente” which can also be found in YouTube (https://www.youtube.com/watch?v=wWQV_3CpGNQ).