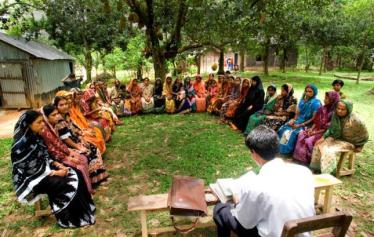 Starting point: In Bangladesh, inability of women to gain access to credit at other than usurious rates

The origin of Grameen Bank can be traced back to 1976 when Professor Muhammad Yunus, Head of the Rural Economics Program at the University  of Chittagong, launched an action research project to examine the possibility of designing a credit delivery system to provide banking services targeted at the rural poor. The Grameen Bank Project came into operation with the following objectives:

The action research demonstrated its strength in Jobra (a village adjacent to Chittagong University) and some of the neighboring villages during 1976-1979. With the sponsorship of the central bank of the country and support of the nationalized commercial banks, the project was extended to Tangail district (a district north of Dhaka, the capital city of Bangladesh) in 1979. With the success in Tangail, the project was extended to several other districts in  the country. In October 1983, the Grameen Bank Project was transformed into an independent bank by government legislation. Today Grameen Bank is owned by the rural poor whom it serves. Borrowers of the Bank own 90% of its shares, while the remaining 10% is owned by the government.