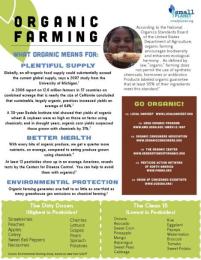 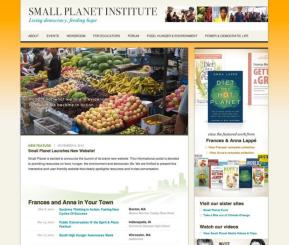 Tools: Publications and speeches, primarily by Francis Moore Lappe and her daughter, Anna

We believe that ideas have enormous power and that humans are capable of changing failing ideas in order to turn our planet toward life. At the Small Planet Institute, we seek to identify the core, often unspoken, assumptions and forces — economic, political, and psychological — now taking our planet in a direction that as individuals none of us would choose. We disseminate this deeper understanding of root causes. With a grasp of root causes, citizens no longer disparage their actions as “mere drops in the bucket.” Once we’re able to see the “bucket,” we realize our drops are quite spectacular; the bucket is actually filling up.

We help citizens choose rewarding ways to focus their energies by finding entry points that interrupt and reverse the negative pattern of powerlessness and despair; and then generate a new, more life-serving spiral of hope in action. Appreciating that we humans are social mimics, the Small Planet Institute spreads stories of these effective entry points.

OUR PHILOSOPHY OF DEMOCRATIC SOCIAL CHANGE

Frances Moore Lappé and Anna Lappé founded the Small Planet Institute in 2001 to further a historic transition: a worldwide shift from the dominant, failing notion of democracy — as something done to us or for us — toward democracy as a rewarding way of life: a culture in which citizens infuse the values of inclusion, fairness and mutual accountability into all dimensions of public life. We call this Living Democracy.

From the Institute’s first book, Hope’s Edge, and all that have followed, the Small Planet Institute reveals how people on every continent are creating living democracies as they discover their power to remake societal rules and norms to serve their widely shared values. We support this historic awakening through collaborative public education efforts with colleagues worldwide and through our own books, articles, websites, speeches, and other media.

We create media to express and share our core philosophy and the positive, solutions stories that we’re uncovering in our research from rural Virginia to rural Kenya, from Bengali villages to Brazilian favelas.

We’ve had an extraordinary year here at Small Planet! Between the release of EcoMind in paperback and Frances’ speech at the World Food Prize Ceremony and Anna’s launching of both the Real Food Media Contestand the Food Mythbusters campaign, the Lappé’s busy highlighting root solutions emerging worldwide. Please read on to explore our 2013 accomplishments…

Since 2001, we have released eight books:

In addition, we have delivered nearly 1,000 public presentations, keynote talks, seminars, and workshops, as well as offered hundreds of radio and television interviews, and published magazine and newspaper articles and op-eds.